How to submit a report
One email with pictures and reports will make it to both the newsletter and the website.
Please submit them as soon as possible.
Photos and videos from more than one member are OK.
Send to: applepro805@gmail.com

VIVA LA QUEBEC…….BEER, THAT IS

We invoked them all, all of the gods of beer that is. From the Norse god Aegir, to Bes and Nephthys of ancient Egypt, Ninkasi of Sumeria or Siris of Mesopotamia. The day and the weather, the setting, the food and the company; it was all so perfect that surely each of these ancient gods must have contributed in some way to bring us luck.

The scene was the backyard of John and Linda Spence, where 14 of the brightest stars of the Applewood Probus Craft Beer Group assembled to taste beers from five Quebec micro brewers and one from the Ottawa area. Guess what …. Ontario won out.

Only two of the beers are available from LCBO, and even then, with limited distribution, so it was a unique opportunity to taste something not tasted before or, perhaps, never will again.

John was the perfect host. BBQing some great burgers and offering up a terrific potato salad and coleslaw and even some delicious squares for dessert. The setting allowed us all to be easily physically separated and safe.

We tended to enjoy the darker, maltier beers most, however, some of that could have been because of the order in which we tried them.

Here is what we tasted in order of preference:

Thanks to the incredible wealth of trivial knowledge that was displayed by a plethora of the assembled crowd, many of them went home with cans of beer as their winnings.

Unfortunately, unless climate change affords us the opportunity to extend the summer backyard season, that will be the last of our beer events for a while. Sadly, Covid has interfered with our ability to gather indoors so our meeting prospects will be limited for the foreseeable future. 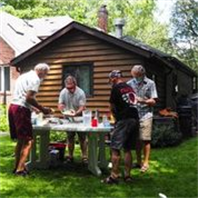 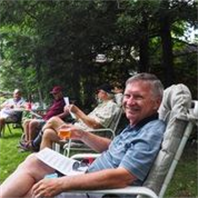 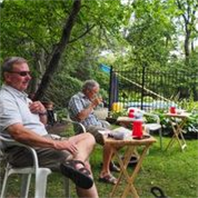 June, July and August Meeting
THE BEAT GOES ON

The craft beer tasting group hasn’t slowed down a bit, in fact, we’ve just been chugging along (pun intended).  We have remained active and committed to tasting our way through this crazy pandemic.
We have had two very well attended Zoom meetings.  In fact, we had to limit the number of participants to keep it manageable, so we were “sold out” for each.  The first featured a random selection of beers but some of the group were not able to get hold of all beers and some, wisely, elected not to go to LCBO for safety reasons.  We were able to find a solution for our second meet.  The host got an online order from Great Lakes Brewery , picked them up at the store and delivered them personally to all 16 tasters.  This worked out a lot better as everyone was able to taste each beer.
Our first outdoor event was held, socially distanced, in John Mark’s backyard.  It was a “stinkin’ hot day” but undeterred, ten of us tasted our way through a nice variety of beers and enjoyed some great sausages BBQ’d by our multi-talented host.
Our second BBQ was at Joe Reid’s place where we were able to spread out under the shade of some beautiful trees and again wolf down some sausage and beer.
Both events featured some great conversation and sparkling entertainment….baseball trivia at John’s, beer jokes at Joe’s.
We will be hosting a third BBQ event in September at the home of John Spence.  More details to come.
Many thanks to our hosts for making it possible for us to enjoy these great social occasions during this unusual time.
Here’s what we tried:

David Litner
Big Rock Brewery Craft Beer Tasting
On Tuesday, November 14, 34 thirsty Applewood Probus members and their guests invaded Big Rock Brewery for the afternoon bent on quenching their thirst for great beer and for beer knowledge.  Finding the brewery is no mean feat as it is hidden away at the back of Burger Priest and Paramount Fine Foods on The Queensway.  Finding great beer, thankfully, is much easier!
Big Rock claims to be the largest craft brewer in Canada.  With their founding brewery in Calgary and branches in Vancouver, Etobicoke and Liberty Village in Toronto, I’m not sure how they still can represent themselves as craft brewers.  That being said, they have a large range of styles, from their most popular Traditional Brown Ale to a Czech style Pilsner, Rhine StoneCowboy Kolsch, Session IPA, Citradelic, Warthog English Mild, Grasshopper Krystalweizen, Belgian Ale and even a barrel aged Flemish Oak, they cover all the bases.
We first did a tutored tasting of their three most popular styles and then we had a “free for all” wherein we could taste any or all of the other eight beers on tap.   There were ample amounts of pizza to soak up the excess alcohol and most of the group went on a detail oriented tour of the facility where we were given a full explanation of everything that goes into running a brewery.  We were also given an opportunity to examine a few different kinds of hops and gain some understanding of how this can influence the taste of the end product.
Keep watching this space for details of the next craft beer event. Rumour has it that it that we may be revisiting our university days and going on an old-fashioned pub crawl.
September 11, 2019 Meeting
9 members of the BTMG (Beer Tasting Management Group) met at WVRST to elect the new group leader and secretary and discuss the upcoming year's activities.

1. David Litner elected leader, 8 for, 1 against.
2. John Mark elected secretary, 8 for, 1 against
3. Program to be a mix of "backyard tastings" in the summer months and various brewery activities during cooler weather; 3 to 4 outings per year to be planned.
4. Advertising to be enhanced and number of attendees to be controlled where max. attendance numbers occur.

The Craft Beer Appreciation Group has been formed as a forum for exploring the increasingly popular world of craft beer. This group is geared towards entertainment and camaraderie with the faint hope that we just might increase our knowledge and develop some sensual appreciation along the way. You don’t have to be a beer expert…..it is important to note that you don’t have to know anything about beer or to even to like it to enjoy this experience. This group is about fun and developing new tastes and pleasures. Please join us!
We meet from time to time as opportunities for novel gatherings are developed.  Where possible, we try to ensure that all who want to come can be accommodated.  The best way to ensure your place at outings which interest you, is to be included on our roster.  To be included, or to get more information, please use the link on our web page to contact the Convenor David Litner.